In the Afterword to Samuel R. Delany and Mia Wolff’s graphic novel Bread & Wine: An Erotic Tale of New York, which was reissued in 2013 by Fantagraphics, Wolff describes the skepticism she encountered when she began working on the collaboration: “At one point I showed Bread & Wine (without the pictures) to my then-editor at Farrar, Straus & Giroux. He said he didn’t understand the point of making it into a comic” (47). In her conversations with Delany, she explained that, for her, the collaboration “was like making a movie of a Henry James novel—putting in what the text left out, either because words couldn’t do it or because the tenor of the writing precluded it” (47). At the University of Chicago on Friday, January 31, 2014, Delany briefly discussed Bread & Wine during the question and answer session that followed a lecture on his practice as a writer and as a teacher.

The 2013 Fantagraphics edition of Bread & Wine.

The lecture was part of Delany’s role as Critical Inquiry’s Visiting Scholar for Winter 2014. As the speaker who introduced Delany reminded us, the University of Chicago-based journal Critical Inquiry has invited scholars and theorists including Fredric Jameson, Julia Kristeva, and Slavoj Žižek to serve as Distinguished Visiting Professor.  In January, Delany taught a course titled “The Mirror and the Maze: Scenes and Sentences in Flaubert’s Sentimental Education and Moore/Campbell’s From Hell.” The UChicago Arts page describes Delany’s talk, the second of two lectures free and open to the public, as his “reflections on the complexities of writing, particularly as they relate to” his thoughts on Flaubert’s novel and Moore and Campbell’s graphic novel. I’d seen Mr. Delany earlier in the week in attendance at Art Spiegelman’s performance of WORDLESS! at the University Of Chicago’s Logan Center. I wondered how Delany might connect Flaubert’s work with Alan Moore, but his public lecture was far more intimate, illuminating, and moving than its title might suggest.

Delany is no stranger to comics. In addition to his collaboration with Mia Wolff, he has written scripts for DC’s Wonder Woman (see issue No. 202, dated September-October 1972, and No. 203, dated November-December 1972), which featured appearances by Fritz Leiber’s sword-and-sorcery characters Fafhrd and the Gray Mouser. He also collaborated with Howard Chaykin on the science fiction graphic novel Empire (1978). His essay on Scott McCloud and on comics as an object of academic study, “The Politics of Paraliterary Criticism,” first published in The New York Review of Science Fiction in the mid-1990s, appears in his collection Shorter Views: Queer Thoughts & the Politics of the Paraliterary (Wesleyan UP, 2000). This essay continues to play a profound role in comics scholarship, notably in Qiana Whitted’s work. Her new essay “ ‘And the Negro thinks in hieroglyphics’: Comics, Visual Metonymy, and the Spectacle of Blackness,” published this winter in the Journal of Graphic Novels and Comics, begins to lay the framework for a theory of comics scholarship informed by African American literary theory. In a 2013 interview included in the Fantagraphics edition of Bread & Wine, Delany admits, “The fact is, writing comics isn’t very hard. But there are always people who do it better than others, and there are people who do it worse” (54).

In his lecture, Delany did not mention Gustave Flaubert, or Alan Moore, or Eddie Campbell. He did not, for example, ask us to consider Moore’s collaboration with Campbell despite the fact that, in the 2013 Bread & Wine interview, he describes the vital working relationship between a comic book writer and a cartoonist. After describing some of the basics of writing comic book scripts, Delany concludes, “Finally, you have to know your artist—I’ve known commercial comic book artists who can do wonderfully realistic work who, nevertheless, cannot draw poor people in old clothes or rags who look in any way believable to save themselves” (54). Although Delany did not address any of these issues in his talk, he need not have, because comics, like prose writing, is another means of human expression—another series of marks, the art and discipline of storytelling. At the beginning of the lecture, Delany asked us to imagine him sitting at his desk in New York City as he prepared the notes for his talk. He then asked us to think of him not as a scholar—he described himself a few times as “only provisionally” as a scholar or academic—but as a writer, an artist. Rather than offering us close readings of Flaubert or Alan Moore, he invited us to lean in, to listen closer, to consider—to borrow a word he and one of the audience members discussed during the question and answer session—“contingencies,” alternatives. Most of all, he talked about compassion, community, and love.

Delany spoke about his memory of an elegant dinner he once shared in Paris with his traveling companions and with a group of Senegalese expatriates. Almost fifty years later, Delany said, he could still remember the white tablecloth “billowing like a sail” as their host, a man who claimed he was an African prince, opened his modest apartment to them. Later in the evening, Delany said, one of his friends, startled, asked, They were gay? Delany reminded us that this trip to Paris took place a few years before Stonewall.

During the question and answer session, after Delany described his writing as a means of thinking, a member of the audience praised him for his candor. How had he developed such honesty in his writing, notably in autobiographical works like Bread & Wine and Times Square Red, Times Square Blue? This candor, Delany explained, has nothing to do, at least directly, with his science fiction. Rather, it has everything to do, he said, with AIDS. He set out, he explained, to dismantle the “murder machine,” the shame and silence that obscures any discourse having to do with sexuality in all its complex forms. Another audience member asked, Do you believe that you now have the freedom to write with fewer codes, fewer silences? Can you be more open in your fiction, too, than you might have been early in your career, especially regarding homosexuality? There are still codes, Delany answered, just different ones. Writing, he argued, is never entirely free of those codes, those messages waiting to be deciphered by the community for whom they are intended. But silences? As Delany made clear, he has no time now (if he ever did) for any silences, omissions, obfuscations.

I mentioned earlier that Delany’s talk was mostly about love. In that way, then, it was about comics. Consider, for example, Ben Saunders’s Do the Gods Wear Capes? Spirituality, Fantasy, and Superheroes (Bloomsbury Academic, 2011), his elegant mediation on comic books, faith, and the mystery of the spirit. In the introduction to his book, Saunders admits that “what might turn out to be the biggest surprise for those readers who think of the superhero genre as predominantly about the pleasures of violent fantasy (in the unlikely event that any such readers have picked up this book), the real subject of all these essays turns out to be love” (Saunders 14). While Delany’s Wonder Woman stories, perhaps, are more a homage to Fritz Leiber, Bread & Wine—like Raymond Briggs’s Ethel & Ernest (1998) and Edie Fake’s  Gaylord Phoenix—is one of the most profound meditations in comics form on the nature of love.

Briggs begins the story of his parents with a moment Delany would no doubt appreciate, a scene of urban “contact” in which Ethel, at work as a domestic, waves to Ernest from a window. He speeds past on his bicycle and answers her by tipping his brown cap: 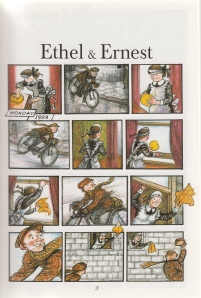 In Issue 4 of Gaylord Phoenix, the lost lover returns and promises our hero, “I can help you”:

During their first night together, Delany and his partner Dennis Rickett watch a public television documentary “on the formation of the Universe with spiraling, flaring images of planets, comets, and stars.” Mia Wolff draws the two men in bed. Constellations surround them as Delany invites Dennis to join him in Amherst, Massachusetts:

Each of these examples suggests that love is recognition, not Dante’s La Vita Nuova (or even Depeche Mode’s “New Life”) but a life already lived or a spirit already familiar. The examples from Briggs, Fake, and Delany tell the story of lovers who already know each other even if, like Ethel and Ernest, they have never met. Gaylord Phoenix already possesses what he needs: his memories are not entirely lost because, as the lover reminds him a few pages later, “ALL MEMORIE / WILL RETURN.” In these intimate moments, spinning galaxies, tails of comets, and distant, blazing stars all begin to look like the streets of Amherst and the curve of the Connecticut River as it makes its way through the Pioneer Valley of Western Massachusetts.

Or, as Dennis Rickett says after he and Delany and Delany’s daughter Iva and their friend John watch another documentary, this time about penguins, “That was almost as good as the creation of the universe…” In these closing pages of Bread & Wine, Dennis could just as well be talking about love itself.