I have a new book co-edited with my friend Brannon Costello just out from Louisiana State University Press. You can read more about the collection, The Other 1980s: Reframing Comics’ Crucial Decade, here at the LSU Press website. This is the fabulous cover by the amazing Keiler Roberts, with a design by Michelle Neustrom: 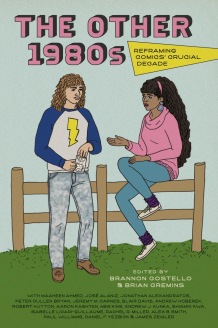 The University Press of Mississippi published my first book, Captain Marvel and the Art of Nostalgia, in December 2016. Keiler also did the beautiful cover for this one:

Meanwhile, below is a list of some of my essays, online and in print. If you’d like a copy of one of the print publications here but are unable to access it, please contact me at brianwcremins AT gmail DOT com and I will be happy to send you one.

Here’s an interview I did with Osvaldo Oyola at his excellent site The Middle Spaces. This is part of his series “The (re)Collection Agency,” which has also featured interviews with scholars Chris Pizzino, Qiana Whitted, Brannon Costello, and Leah Misemer!

This is an old interview I did with the late Tom Spurgeon in 2013. I had a great time talking with Tom.

“‘Entertainment Should Be an Adventure’: Reggie Byers, Shuriken, and the Black-and-White Boom” in The Other 1980s: Reframing Comics’ Crucial Decade, eds. Brannon Costello and Brian Cremins. LSU Press, 2021: 105–119.

“‘How quickly we forget’: Immigration and Family Narrative in James Sturm’s The Golem’s Mighty Swing and Unstable Molecules” in Immigrants and Comics: Graphic Spaces of Remembrance, Transaction, and Mimesis edited by Nhora Lucía Serrano. Routledge, 2021: 39–53.

“Quotations from the Future: Harvey Kurtzman’s ‘Superduperman,’ Nostalgia, and Alan Moore’s Miracleman” in Seeing Mad: Essays on Mad Magazine’s Humor and Legacy from Cover to Fold-In, Eds. Judith Lee and John Bird. University of Missouri Press, 2020: 465–90. This is a revised version of the essay that first appeared in Studies in American Humor in 2014.

“Bumbazine, Blackness, and the Myth of the Redemptive South in Walt Kelly’s Pogo.”  Comics and the U. S. South.  Eds. Brannon Costello and Qiana J. Whitted.  Jackson: University Press of Mississippi, 2012: 29–61.

“Depersonalization, Mysticism, and Mourning in John Porcellino’s Perfect Example and Carrie McNinch’s You Don’t Get There from Here.”  International Journal of Comic Art 13.1 (Spring 2011): 249-274.

I contributed to a memorial roundtable on Stan Lee for Alter Ego and the Fawcett Collectors of America in issue #161 (November 2019).

My essay on “Captain Marvel and His Feud with Mr. Tawny” from Captain Marvel Adventures No. 113 (October 1950) appears in Alter Ego #136 (November 2015) as part of a Fawcett Collectors of America 75th anniversary tribute to the hero.

“‘The World’s Mightiest Mortal Gets Analyzed!’ Captain Marvel Adventures No. 56 and John Huston’s Let There Be Light.” Alter Ego #127 (August 2014).

Foreword to Marnie Galloway’s In the Sounds and Seas (One Peace Books, 2016). Order a copy here! Or, better yet, get a copy from your local bookstore or comic book shop.

“A Review of Edie Fake’s Gaylord Phoenix in the Form of a Birthday Greeting for Jack Kirby.” Closure: Kieler e-Journal für Comicforschung no. 4, November 2017, http://www.closure.uni-kiel.de/closure4/cremins.

Review of Art Spiegelman’s WORDLESS! performance at the University of Chicago, International Journal of Comic Art 16.2 (Fall/Winter 2014). This is a print version of the review that appeared here on the blog in early 2014. I just changed a few words here and there.

From The Middle Spaces

From The Los Angeles Review of Books

“Trust Your Demon”: On Roger Zelazny’s A Night in the Lonesome October

“How to Read The Curse of the Werewolf“

Is Otto Binder and Joe Orlando’s “I, Robot” a Protest Novel?

Is Bill Mauldin’s Back Home a Graphic Novel?

Other online essays (mostly) about comics:

Walt Kelly and Me

“The Infernal Ride”: Notes on Oscar Micheaux’s The Symbol of the Unconquered and Tarantino’s Django Unchained