In a few hours, I’ll be headed to Columbia, South Carolina for the 2016 International Comic Arts Forum at the University of South Carolina. On Saturday I’ll be presenting a paper on a panel called “Comics Readers” with three amazing friends and scholars: Qiana Whitted, Carol Tilley and Chris Pizzino! Can’t be there? Here’s a little preview of my paper, which is based on some material from my upcoming book from the UP of Mississippi, Captain Marvel and the Art of Nostalgia. I’ll also be moderating a panel on Thursday and giving out official Comics Studies Society buttons and bookmarks at the ICAF info table over the next couple of days (haven’t joined the CSS yet? You should before the founding membership drive closes tomorrow, April 14th!). Come by and say hello!

My paper features a big cast of supporting characters: Billy Batson, Captain Marvel, Mr. Tawny, Harlan Ellison, Roy Thomas (who’ll be at ICAF on Saturday, I hope with one of his capybaras), Isaac Asimov, C. C. Beck & Pete Costanza, Henry Kuttner, and Hoagy Carmichael (to name just a few). Email if you’d like to read the rest of it (or for the Works Cited).

Now I better go feed the cats and finish packing.

from “‘Tiny Flashes of Light’: Otto Binder and Nostalgia in the Comic Book Fanzines of the 1960s”

Even a talking tiger gets writer’s block sometimes. For Billy Batson’s best friend Mr. Tawny, it happened often, first in “Captain Marvel Battles the Plot Against the Universe” from September, 1949. Hard at work on his memoirs, Tawny realized that his story would not be complete without the facts on Captain Marvel. Billy, acting as a kind of magical research assistant, offered a first-person account of the stranger, the subway tunnel, and the mysterious train ride.

Then, a few years later, Mr. Tawny undertook a new project, a book called Homing Habits of Hibernating Animals. In this three-panel sequence from Captain Marvel Adventures 126 (November 1951), written by Otto Binder and drawn by C. C. Beck (most likely in collaboration with Pete Costanza), Tawny, a pencil clasped in his right paw, struggles to finish his masterpiece. Most of all, he is afraid of being alone: “Night after night I scribble away in my study, writing this dry old book!” he admits. “ I live in obscurity! Nobody ever hears of me!” 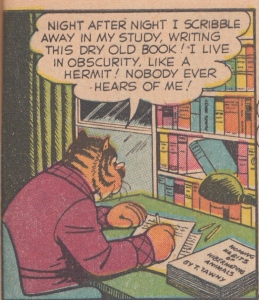 In the yellow light cast by his desk lamp, we see his manuscript, almost complete, along with two more sheets of paper and a couple of extra pencils. His shelves are lined with books, and he wears a green and purple dressing gown. In the next panel, after lamenting the fact that he’ll never “make the headlines,” “win an Oscar,” or find himself in a “a hall of fame,” he looks up from his work, his reading glasses perched on the bridge of his furry nose, and exclaims, “I’m getting nowhere in life! I’ve to make a change!” Billy arrives just in time to comfort his friend. “Holy moley!” he exclaims. “What’s wrong, Mr. Tawny?”

In an essay about the real-life counterparts of Captain Marvel’s cast of characters, Beck, Binder’s friend and long-time collaborator, revealed that “Mr. Tawny, the talking tiger, was actually . . . who else? Otto Binder!” (“The Human Quality” 29). The writer, he added, “had a lot of fun laughing at himself in the Mr. Tawny stories” (29). Binder filled Tawny’s adventures with autobiographical traces that offer insights into the complex relationship between comic books and nostalgia. Perhaps this was because the character, as Binder noted in a 1964 letter to Roy Thomas published in the fanzine Alter Ego, “lent himself more to orthodox concepts” (“Special!” 111). That is, Tawny struggled with an adversary Captain Marvel never had to face: time itself, and an inevitable descent into middle age.

In that remarkable Alter Ego letter, Binder provided comics historians with a portrait of his long career, including his memories of the popular Monster Society of Evil serial and his opinion on the outcome of the National v. Fawcett copyright infringement case. By 1953, when Fawcett settled with National and discontinued most of its comic book line, including all of its Marvel Family titles, Binder had written, by his own count, “a total of 529 stories about the Big Red Cheese alone, for earnings of $37, 358” (“Special!” 111). He was proud of his success and grateful for the stable, middle-class life it provided for him and his family: “My present-day home in Englewood, New Jersey,” he noted, “was dedicated at a Fawcett party as being ‘The House That Captain Marvel Built.’ Truer words were never spoken. He paid for it twice over” (112). At the close of this letter, however, Binder, always generous and kind to his readers, offers a gentle word of warning. Here, he actively resists what the late theorist Svetlana Boym has called that “romance with one’s own fantasy” that often characterizes nostalgic reflection (xiii). Binder, who’d spent so much of his career imagining the future, offers some advice to those who would study the past. “The above reminiscences,” he begins,

disjointed and seemingly narcissistic, are offered only with the thought of shedding some insight on those days of yore when comics were in flower. To attempt any sweeping, definitive picture is madness. Only in the tiny flashes of light given by individual anecdotes and recollections of those of us in the field as pros at the time can come any rational picture of what to me is still an incomprehensible rise-and-fall of a great empire—the world of picture-story heroes whose peers will never again be seen. (Binder, “Special!” 112)

Binder anticipates one of the challenges scholars continue to face: how does one tell this story? And what role has nostalgia played in shaping the history of comics? In Comics Versus Art, Bart Beaty reminds us that key members of what he calls “the second wave of organized comic book fandom” in the United States often “wrote nostalgically” and with great affection about comics from the 1940s and 1950s (154). These fans, many of whom admired and corresponded with Binder, also, as Beaty points out, were instrumental in the development of “comic book specialty stores, comic book conventions, fan magazines, comic book price guides, and even publishing houses” (154). At the close of the Binder biography Words of Wonder, Bill Schelly claims the writer as a father figure whose “nurturing and supportive actions” (234) inspired several important figures in this “second wave” including Richard and Pat Lupoff, Jerry Bails, Bill Spicer, and Roy Thomas. In the early 1970s, Binder and his wife Ione, still grieving the tragic loss of their daughter Mary, continued to welcome fans, including a young Frank Miller, to their home in upstate New York (Schelly 218-219).

When he died in 1974, Binder also left behind an archive of material—letters, scripts, unpublished essays—some of which are now housed at the Cushing Memorial Library at Texas A&M University. That wealth of material on comics history, however, is only part of Binder’s legacy. For Binder, those conversations with fans in the 1960s no doubt brought back fond memories of his old friends and colleagues at Fawcett. By sharing his memories with this new generation of amateur historians and aspiring writers and cartoonists, Binder introduced this “second wave” to a critical discourse on comics that had its roots in the close-knit community of editors, writers, and artists with whom he’d worked in the 1940s and early 1950s.

In an account included in Jim Steranko’s History of Comics, Binder enthusiastically recalled those spirited conversations: “All of us lived, ate, and dreamed comics in the Golden Era,” he said. “No sooner did two of us get together (or one, if he liked to talk to himself) than off we went on which characters were best—that crazy Jack Kirby’s layouts—Eisner, who can beat him—hey did [Jack Binder’s] shop do 2,000 or 3,000 pages last month—I think I’ll be glad when I’m drafted and get a ‘rest’” (Binder qtd. in Steranko 17). In a 1977 interview with Chris Padovano, Beck also remembered those years with great affection (and with his trademark sarcasm): “The parties we had during the forties are my fondest memories,” Beck told Padovano. “We had no pot or rock music, but plenty of booze and old-time [accordion] and guitar music” (Beck qtd. in Padovano; Binder played accordion and Beck sang and played guitar with his wife Hildur). Although Binder never wrote a sustained work of comics criticism, Beck wrote numerous articles on the theory and practice of making comics for The Comics Journal and for his Critical Circle, a small group of fans and comics professionals with whom he shared his unpublished work in the two years before his death in 1989. In addition to their work on some of the best-selling comics of the Golden Age, then, Binder and Beck were instrumental in shaping the discourse on comics that we, as scholars, have inherited from that “second wave” of fans in the 1960s and from the fanzines and books in which they documented the early years of what Binder called “a great empire.”

In the introduction to The Future of Nostalgia, Boym argues that “[t]he nostalgic desires to obliterate history and turn it into private or collective mythology, to revisit time like space, refusing to surrender to the irreversibility of time that plagues the human condition” (xv). In his Alter Ego letter, Binder cautions against any idealization of the past. The “second wave,” however, set out to preserve and celebrate what it could of that “collective mythology,” to borrow Boym’s phrase. In the introduction to the first issue of The Golden Age of Comics from 1982, for example, Don Thompson and Maggie Thompson describe their vision for “an ideal world” where “nothing would ever go out of print. It should be possible for fans and casual readers alike to obtain the complete Action Comics, the complete works of Milton Caniff, and the entire run of any comic book, comic strip, or magazine at libraries” (4). What they call a “Utopian dream” is now coming true, not only because of websites like The Digital Comics Museum but also because of institutions such as the Billy Ireland at Ohio State and Randall Scott’s Comic Art Collection at Michigan State. Binder and his alter ego Mr. Tawny, however, pose a challenge to these “utopian” visions. If, as Alan Moore once said as he outlined his ideas for his version of Marvelman (Mick Anglo’s British variation on Captain Marvel), “the central appeal of nostalgia is that all this stuff in the past has gone” and is “finished” (Moore 24), then what pleasure is left to us once the past, and all its mysteries, have been revealed to us? Some ghosts are best left alone. Or, as Binder himself wrote in another letter to his old friend Julius Schwartz published in Shazam! No. 4 in 1973, a little over a year before his death, “The comics seem like some long-ago dream and I have no slightest hankering to go back to them, in case you’re wondering” (“Shazamail!”). That “long-ago dream” might provide just the illumination Binder believed necessary for any “rational picture” of comics and their history. It has all the elements of a lost Binder and Beck classic: time, memory, loss, redemption. A little humor. Just imagine: “Captain Marvel, Mr. Tawny, and the Long-Ago Dream.” I like it.