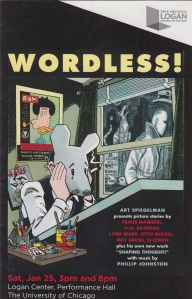 The program from WORDLESS! at the University of Chicago, Saturday, January 25, 2014.

He studied MAD, he said, the way some people study the Talmud. That’s Art Spiegelman, early in his his lecture/slide-show/performance piece WORDLESS!, a collaboration with composer Phillip Johnston. Spiegelman and Johnston’s sextext brought WORDLESS!, first commissioned by the Sydney Opera House, to the University of Chicago’s Logan Center on Saturday, January 25, 2014 at 3 pm and again at 8 pm. We saw the 3 pm show.

Most of the performance was given over to a series of images from woodcut novelists including Frans Masereel and Lynd Ward, both of whom, Spiegelman pointed out, have been “grandfathered” into the history of the graphic novel. Ward’s Gods’ Man, first published in 1929, was a major influence on Spiegelman and on his fellow New Yorker and graphic novel pioneer Will Eisner.

With a compelling score as accompaniment, Spiegelman and Johnston transformed Gods’ Man into a series of moving pictures—not a film, not a work of animation, but pictures, one after the other, presented to us in what Hillary Chute, in her program notes, describes as “a performance that mixes media in real time in order to question what it is to look, to read, and to listen.” After other examples of wordless, early-to-mid-twentieth century narratives, including narratives from A.B. Frost, H.M. Bateman, Otto Nückel, Milt Gross, Si Lewen, and Wilhelm Busch, Spiegelman concluded the performance with his own “Shaping Thought!”, a work that was also silent, except, of course, for the music, the speech balloons filled with geometrical shapes, and the audience’s laughter and delight. In the opening sentence of her notes, Chute writes, “Art Spiegelman and Phillip Johnston call their collaborative live performance WORDLESS! ‘intellectual vaudeville.’” It was also a theater of memory, at least for the first half, as Spiegelman recalled the cheap, scandalous, often coverless comics his father brought home for him in the 1950s.

As moving as the music and the images were in the second half of the performance, I was most captivated by Spiegelman’s memories of the EC Comics of his childhood. Seeing Vladek and Anja Spiegelman again in this new narrative context, outside the confines of Maus, was tremendously moving. It was like seeing old friends, or opening an old but secret box of photographs. There are new stories here: Art and his mom at the grocery store, Art begging her to buy him a paperback MAD collection, Vladek–like one of the parents in a Charlie Brown cartoon–standing over his son and telling him, Well, I can get you cheaper comics. Don’t waste your allowance. You’ll see. And Vladek comes home with all the comics Fredric Wertham warned America about in Seduction of the Innocent.

Spiegelman illustrates each of these moments with panels drawn in a colorful, relaxed, playful style. Slowly, as an audience, we understand—we are seeing Art’s childhood, but this time, not in black and white, but in color, and Spiegelman himself is telling us the story, reading his father’s word balloons in the same voice we hear in Maus. But, again, these memories, paired with EC covers by artists including Johnny Craig and Basil Wolverton, are in color. There are no masks here, no mice, no cats, no dogs, no frogs, no pigs. Just a kid, his mom and dad, and some comics, a Ballantine paperback in a spinner rack in the checkout aisle of the grocery store. I’d like more of those stories.

My copy of The MAD Reader–not the one Spiegelman would have read as a kid, but the 24th printing from March, 1970.

But how did this autobiographical narrative make its way to the woodcut novels promised in the program booklet? Wordless comics, and visual narratives that feature only one image on each page, Thierry Groensteen argues in his new book Comics and Narration (in French, Bande dessinée et narration: Système de la bande dessinée 2, now available in a wonderful English translation by Ann Miller), make certain demands on our memories. It’s no surprise, then, that Spiegelman should begin his lecture by offering us stories–words and pictures–from his past. In a discussion of the art of Masereel, Ward, and Martin Vaughn-James’s The Cage, Groensteen writes,

In works of this type, there are never more than two images visible to the reader at any one time, split across two pages—one on the left-hand and on one the right-hand page (although sometimes only the latter is used). The space within which iconic solidarity comes into play is less that of the page—a flat surface immediately accessible at a glance—than that of the book, a foliated space that must be discovered progressively. The dialogue among the images depends on the persistence of the memory of pages already turned. (Groensteen 35)

Here Groensteen describes how the single-page images of, for example, Masereel’s Passionate Journey (from 1919, titled Mein Studenbuch in German) provide readers an escape from the typical grid of the comic book page. But he also suggests that a wordless novel like Passionate Journey or Gods’ Man asks us, above all, to remember an image now one or two or three or more pages in the past. These narratives, then, do not offer us the comfort of a page of panels that, for example, allows us to see the past, present, and future simultaneously. A woodcut novel reminds us instead about our own passage through time and space as we leave a trail of images in our wake.

At one moment, late in Saturday’s 3 pm performance, Spiegelman experienced some technical difficulties with his computer, which refused to show one of the stills from his presentation. We saw a blank screen, a menu on the left-hand side. Spiegelman walked offstage, perhaps to fix the problem, but his mic was still working. “I don’t know what happened,” we heard him say (at least, that’s what I recall him saying); “I didn’t even touch it.” It was a human moment that added a touch of chaos to the afternoon. We would share this too, I thought, as an audience–we’ll also remember the glitch. Science fiction writer Samuel R. Delany was there, too,  just a few rows from the front of the stage (Delany is visiting professor this term at the University of Chicago).

Then Spiegelman was back and he continued the lecture. It was a mistake. A brief fuck-up. That’s okay. It’s a memory now, too, and maybe as an audience we all needed that moment, that mistake, to collect ourselves, to laugh, to wait patiently for the show to start again. And, anyway, the musicians didn’t stop playing, and Spiegelman didn’t stop speaking, even if the computer gave up, just for a few seconds.