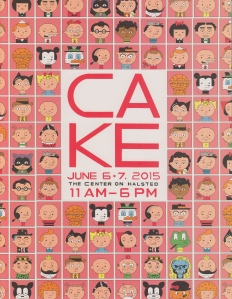 As I look forward to the 4th annual Chicago Alternative Comics Expo (CAKE) this weekend, I’m reading letters from Otto Binder, the great Captain Marvel and Superman writer who got his start, as Bill Schelly explains in the biography Words of Wonder, with articles for the Schurz High Weekly. If you read my report on CAKE 2013, you’ll know I do this every year, as CAKE gets me thinking about Chicago’s place in the history of comics and comic book fandom in the United States.

Born in Michigan in 1911, Binder grew up in the Portage Park neighborhood and graduated from Schurz, on the corner of Milwaukee and Addison, in 1929 (see Schelly 23-24 and 31). In an interview last year, I asked Harlan Ellison to consider Binder’s achievements in comic books and in the science fiction magazines of the 1930s and 1940s, where the pulp writer published short stories written in collaboration with his brother Earl under the pen name Eando Binder (look closely and you’ll see it: E and O, or, Earl and Otto Binder). “[Eando] Binder was always a great, iconic, early tech days science fiction name,” Ellison explained, “along with Ed Earl Repp and Stanton A. Coblentz and all the rest of the names that are now graveyard dust, just as mine will be. I don’t think Otto Binder was one of the great writers of all time. I don’t think Victor Hugo is lying ‘neath the turf beetling his brow over Otto Binder. But for commercial fiction, and particularly for comic books, he was top of the line.”

Binder was significant not only as a comic book writer, but also as a key figure in early comic book fandom in the United States in the 1960s (or “the second wave of organized comic fandom” in the U. S., as Bart Beaty calls it in his 2012 book Comics Versus Art; see page 154). In a 1964 letter to Jerry Bails, Binder imagines what fandom might look like in the future (see Binder’s letter in Schelly, p. 168). Always the science fiction dreamer, Binder offers Bails a few suggestions on how to expand this already thriving community: “Have you comics fans,” he asks,

whether “pure” or science-fictionally dichotic, thought of your own annual “Comi-cons” similar to their very successful and colorful “SciFi-cons”? At the rate the comics crowd outnumbers the always-small SF audience, such gatherings ought to hit at least 10 times as much, namely 10,000! And where are the “Oscars”/ “Hugos” / “Emmies” awarded to top comics talent each year? (Reserve the Anti-Award for the Comics Code censors who are the people society can do most without).

Binder was no doubt also thinking about his past when he made these suggestions. He’d been involved in the Chicago science fiction fan community of the 1930s, notably through his friendship with writer, editor, and Edgar Rice Burroughs-imitator Otis Adelbert Kline (Schelly 42). I have Binder in mind as I think about the various communities, past and present, who play played a role in developing CAKE. I also imagine what new communities might take shape as writers and artists and fans meet each other at the Center on Halsted this weekend. 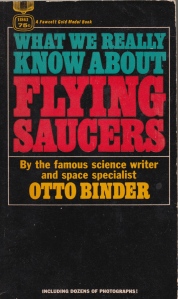 Binder’s What We Really Know About Flying Saucers (1967). He dedicated the book to his late daughter, Mary.

I’ll admit that my obsession with what Walter Benjamin might have described as the “affinities” between past and the present is at work in some of the programming we’ll have this weekend. I’ve had the good fortune over the last year to collaborate with Ben Bertin, Amara Leipzig, and Max Morris on this slate of panels, which will range from a conversation with Gilbert and Jaime Hernandez, moderated by Caitlin McGurk from the Billy Ireland Cartoon Library and Museum at Ohio State, to an Eyeworks Animation Festival and a session on comic books and New Wave science fiction.

Ytasha Womack, comic book writer and Afrofuturist scholar, for example, will lead her panelists, Eleanor Davis, Lale Westvind, and Tom Kaczynski, in a conversation about what, in one of our CAKE programming meetings, we’ve called “the spiritual resonance” between comics and science fiction, not only in the work of these three creators but also in reference to the writing of Octavia Butler, J. G. Ballard, and Ursula K. Le Guin. So, we’re not so much talking about rockets and space monsters and time travel as we’re thinking about science fiction as a philosophy, a practice, a mode of being (or not being). Ytasha explains it all much better in her book Afrofuturism: The World of Black Sci-Fi and Fantasy Culture. There’s another parallel here with “The Golden Age(s) of Comics” panel moderated by Gene Kannenberg, Jr.: doesn’t all speculative fiction long for utopian spaces? Maybe that’s what science fiction is really about, then: that desire for another reality, even if it exists only in the imagination. 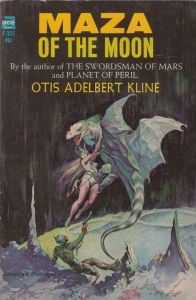 An Ace paperback reprint of one of Kline’s novels from the 1930s. Cover by Frank Frazetta.

Here’s a secret, too: the Golden Age panel, with Jillian Tamaki and Dash Shaw and Sam Sharpe, is, in a sense, about speculative fiction, but this time we’re looking at the past, about the nostalgic narratives that have shaped our present. It’s all there in the comics themselves: in Jillian and Mariko Tamaki’s This One Summer, or in Shaw’s New School, or in Sharpe’s Viewotron No. 2. Gene’s panel, then, won’t be about Captain Marvel or the Justice Society of America or your collection of Famous First Editions. We’re imagining a different Golden Age here, not the one in which characters like Superman and Batman first appeared, but the era in which we now find ourselves. Gene, Jillian, Dash, and Sam might also get closer to explaining the role that nostalgia plays in so many comic book and graphic narratives. Consider, for example, what Alan Moore once said of his work on Marvelman/Miracleman, as he described “that warm glow of nostalgia which is probably the single biggest factor keeping us interested in this medium, whatever amount of intellectual satisfaction we manage to glean on the side” (Moore 31). 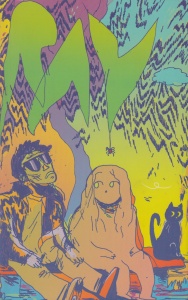 If you’re interested in exploring a new universe—and not the one Marvel introduced in the 1980s, though I’ve been known to pick up issues of Star Brand and DP7 in the quarter bin at Chicago Comics—you might want to check out Jake Austen’s conversation with Zak Sally and Mickey Zacchilli on Saturday afternoon, as the three talk about music, comics, and self-publishing. Sally and Zacchilli are both forward-thinking cartoonists, producing work that blurs the lines between zines, minicomics, and more traditional comic books narratives. In re-reading Jack Kirby’s The Demon just a few months ago, I had fun looking for visual parallels between Zacchilli’s Rav and those apocalyptic, two-page spreads where Etrigan hovers over Gotham City in pursuit of Witch Boy.

On Sunday, writer and artist Amy Peltz will explore other landscapes with Derf Backderf, Keiler Roberts, and Sarah Becan, as they talk about what we’ve called “The Honest Truth,” the transformation of the raw material of everyday life into comics. That autobiographical impulse in contemporary U. S. comics can also be traced, at least in part, here to Chicago, in Justin Green’s Binky Brown Meets the Holy Virgin Mary, Richard “Grass” Green’s Un-Fold Funnies and, more recently, in Jessica Abel’s early work. 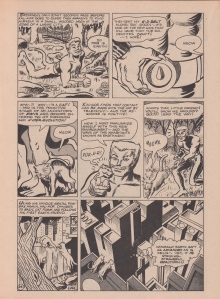 On Sunday afternoon, Amara Leipzig and I will be hosting a panel/workshop called The Regionalism Experiment featuring Ben Passmore, Leigh Luna, Isabella Rotman, Anuj Shrestha, and Mickey Zacchilli. You’ll notice that C. C. Beck, who trained at the Chicago Academy of Fine Arts in the late 1920s as his future artistic collaborator Otto Binder was finishing at Schurz, appears several times in our panel descriptions. I guess you could say he hovers like a ghost over the proceedings, but without his 1983 conversation with Will Eisner we’d have no shape to our workshop, which will ask the artists to place themselves in a landscape: what does that autobiographical landscape look like, and how did they get there? In the interview, Eisner urged Beck to talk more openly about Minnesota and Chicago and New York, the three fixed points in the map of the Captain Marvel co-creator’s early years: “The reason I’m questioning you is that I believe geographic origin impinges on style of art considerably,” Eisner said (Eisner 18). Amara and I would like to know if that assertion is true, and, if it is, we’d like to see how these points of “origin”—the real ones, or the ones found only in the imagination—have shaped their work. 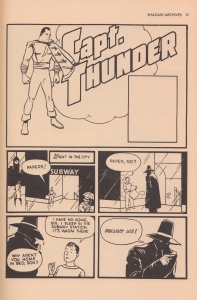 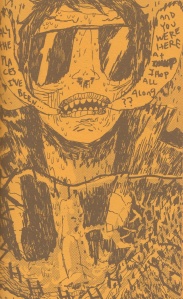 The first narrative page from the ashcan edition of what became Whiz Comics No. 2 in 1940 (from The Shazam Archives Volume 1, DC Comics, page 11) and an excerpt from Mickey Z.’s Rav (Youth in Decline, 2014).

I don’t know if Beck had Chicago in mind when he drew this page for Fawcett over 75 years ago, and I don’t know if Mickey Z. was thinking about an IHop in Providence, Rhode Island when she sketched this portrait of Juice from Rav, but I see both drawings as existing within the same space. Look closer and you might find that one resonates with the other: a mysterious stranger, a sudden revelation, a moment of doubt. Maybe I’m looking for some kind of comic book singularity here, a unified field theory, in which all comic books exist within the same temporal space. Or maybe I just read way too many superhero team-up comics when I was a kid. I especially loved the ones where the Golden Age Superman would return, gray-haired, and throw down with a younger version of himself. It was like a history lesson and time travel all in one for only 60 cents. 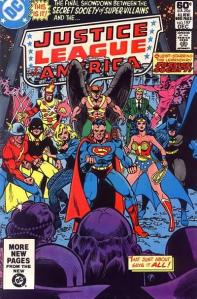 One of my favorite comics: the George Perez (p), Mike DeCarlo (i) and Anthony Tollin (c) cover for Justice League of America No. 197 (December 1981). Image from the Grand Comics Database (since I can’t find my copy).

If this is all sounding too abstract, don’t worry—it’s going to be a lot of fun, and it will all start with some kick-off events on Thursday and Friday, including The Ladydrawers Comics Collective and Femicomix Finland team up at Women & Children First in Andersonville on Thursday night. On Friday the 5th at 7, see John Porcellino, Eleanor Davis, and Keiler Roberts in conversation with Hillary Chute at Quimby’s.

If you’ve been to CAKE over the last few years, come back and visit. If you’ve never been, make sure you’re at the Center on Halsted this weekend. Go to a workshop or a panel. Meet some new friends. Come by and say hello.

For more on the weekend’s events, visit the CAKE website: http://www.cakechicago.com/

Quimby’s also has a great list of all the CAKE-related events coming up: http://www.quimbys.com/blog/comics/cake-announcements/ 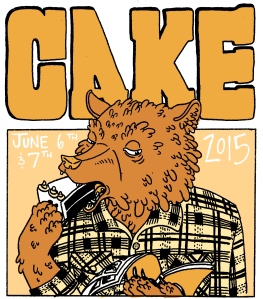 p.s. I’ll have copies of my band’s new album if you’d like one. Pet Theories will be playing the CAKE after party at The Observatory on Saturday the 6th. I’ll also have some copies of Allison’s new zine, Satan Is My Father, which features essays on two of my favorite but lost Connecticut bands of the 1980s and 1990s. And speaking of collaborations made possible by CAKE, here is Amara Leipzig’s artwork for our album cover: 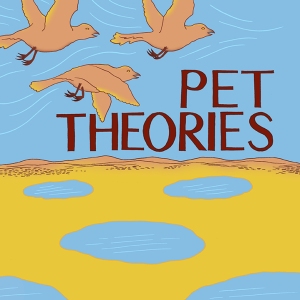 One thought on “A Chicago Alternative Comics Expo (CAKE) 2015 Preview!”