This morning over at The Hooded Utilitarian, Noah re-posted an essay of mine about the end of the Comics Buyer’s Guide. When I was editing that post last winter, not long before the final issue appeared, I tried to find the letters I’d written to CBG in the 1980s. At some point my mom cleaned out my old desk and left behind nothing but a few short stories and evaluations from my college creative writing classes. My copies of CBG are long gone.  I finished the essay anyway but it felt incomplete.

Last summer I was at the amazing MSU comics archive doing research on Otto Binder and C.C. Beck and found a copy of CBG with Beck’s obituary, written by editor Maggie Thompson. The article appeared in #839, dated December 15, 1989: 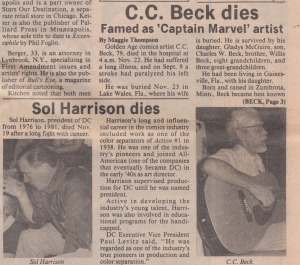 As I skimmed the rest of the issue, I also found one of my letters, published in the paper’s “Information, Please” column. In December of 1989 I was a junior at Sacred Heart High School in Waterbury, Connecticut. My third-year Spanish teacher–who, I remember, was obsessed with Billy Joel’s Storm Front album–had just assigned us a research project. I think she suggested I write a paper on comic books written in Spanish. I talk a little about the project in my letter, which appears just a few pages after Beck’s obituary:

Editors Don and Maggie Thompson included a response in italics following my plea for help. Within a few weeks, I’d received a letter with suggestions from M. Thomas Inge, one of the pioneers of comics scholarship. I’d also received a package of comics, including Spanish-language editions of Spider-Man and Lee Falk’s The Phantom, along with some copies of Condorito, from Hector Rambla, a comics fan and collector from New York City. Hec and I became penpals. Almost twenty-five years later, my first essay on Walt Kelly and Pogo appeared just after Tom Inge’s article on Lil’ Abner in Comics and the U.S. South. When I received my copy of the book, I suddenly remembered his act of kindness and generosity.

I wish I’d kept Professor Inge’s letter, too. I wanted to thank him when I saw him at OSU last November, but I was too shy. Inge’s letter was a revelation for me: a real college professor writing about comics. It was like meeting Shazam at the end of that mysterious subway tunnel.

I don’t remember how I did on the project for my Spanish class. I think it was ok, but the paper must have been better than my classroom presentation. My pronunciation was terrible.

And I never got around to writing to the Hernandez Brothers, even though, as the wordy, 15-year old me remarks at the end of the letter, “A project on Love and Rockets could prove very interesting.” I’m sure it would! If I could send a letter back to my 15-year-old-self, the way Allie Brosh does in Hyperbole and a Half, I’d include a copy of Charles Hatfield’s Alternative Comics: An Emerging Literature with it.

I won’t say too much about how uncanny it was to find my letter again, as I worked on a new research project, one on C.C. Beck. I don’t know if I always believe in magic, but I do believe in what Walter Benjamin called “secret affinities,” which I guess is probably the same thing.

Maybe someday I’ll have time to go through the CBG archive at MSU and I’ll find a few other letters from the past. I know there’s one or two more in there. I wonder what they’ll say?

And, just for the record, it’s Oakville, Connecticut, not Oaksville. But Inge’s letter, and that envelope of comics from Hec, arrived just the same.