This is Part 6 of my new zine, Brass City, which is available from me or from Quimby’s in Chicago.

In the opening sequence of All-Star Squadron Annual #3, published by DC Comics in 1984, a character named Tarantula stumbles across a box filled “with some old newspaper clippings, and what looks like a couple of hand-written notes.” At the end of the issue’s framing sequence, written by Roy Thomas with art by Jerry Ordway, Wonder Woman feeds the documents into the Magic Sphere, a bit of Amazonian technology that allows the viewer to see the past, the present, and the future. In the story, set in the early days of World War II, the Sphere provides the flashbacks for the rest of the narrative, which features a variety of artists and a number of obscure Golden Age comic book characters.

I read this issue again on a recent weekend trip to Wisconsin. I had a vague idea that I’d use the comic book to write about the relationship between memory, nostalgia, and scholarly research. I first read this comic book in the summer of 1984 as I sat with my grandmother on the front porch of our house on 30 Bamford Avenue in Oakville, Connecticut. In the summer my grandmother would sit on her rocking chair, which was painted the same industrial blue as the porch itself. She would talk to my mother, or to her sister, or to me, or to the cars speeding down Bamford Avenue to Davis Street. We lived at the bottom of a steep hill.

The porch was a gathering place for my mother’s family for a couple of generations. I have a photograph of my Lithuanian great-grandfather, Anthony Budris, sitting on the stoop. 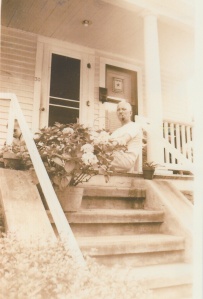 My great-grandfather sits in nearly the same spot where I will sit in my lawn chair and read All-Star Squadron over forty years later. He is smoking a pipe. Behind the potted plant is the face of a young boy, probably his grandson.

In the mid-1970s I am sitting with my great aunt Annie’s dog, Spooky. I have a phantom memory of holding him like this and of him playfully struggling with me. He was a lively dog who chased cars down Bamford Avenue. Annie was always afraid, as she often said, that one of the cars would clip him.

In another photograph, my grandmother sits with two dogs. Behind her is a blue spruce tree, one that, by the 1970s and 1980s, will grow as tall as the house itself. My grandmother sits just a few steps down from my great-grandfather and from me. This photograph, like the one of my great-grandfather, was probably taken during World War II. The same wooden railing, painted white, frames each of the images. I marvel at the continuities here, three generations all sharing the same location not in time but in space.

I have more photographs of the front porch than I do of any room in the house itself. If I’d been born in the 1940s or 1950s, I might have imagined the porch as the prow of a great sailing ship, but, as I was born in 1973 and was a fan of Star Trek and Star Wars, I often imagined the house as a space craft like the Enterprise or Han Solo’s Millennium Falcon. I heard the sounds of the cars whooshing past outside as the ship’s engines. In graduate school, when I read Herman Melville’s White-Jacket and my professor asked me to describe the elements of Melville’s “ship of state,” I remembered the house on Bamford Avenue as a sea-worthy vessel with its captain perched on its front steps.